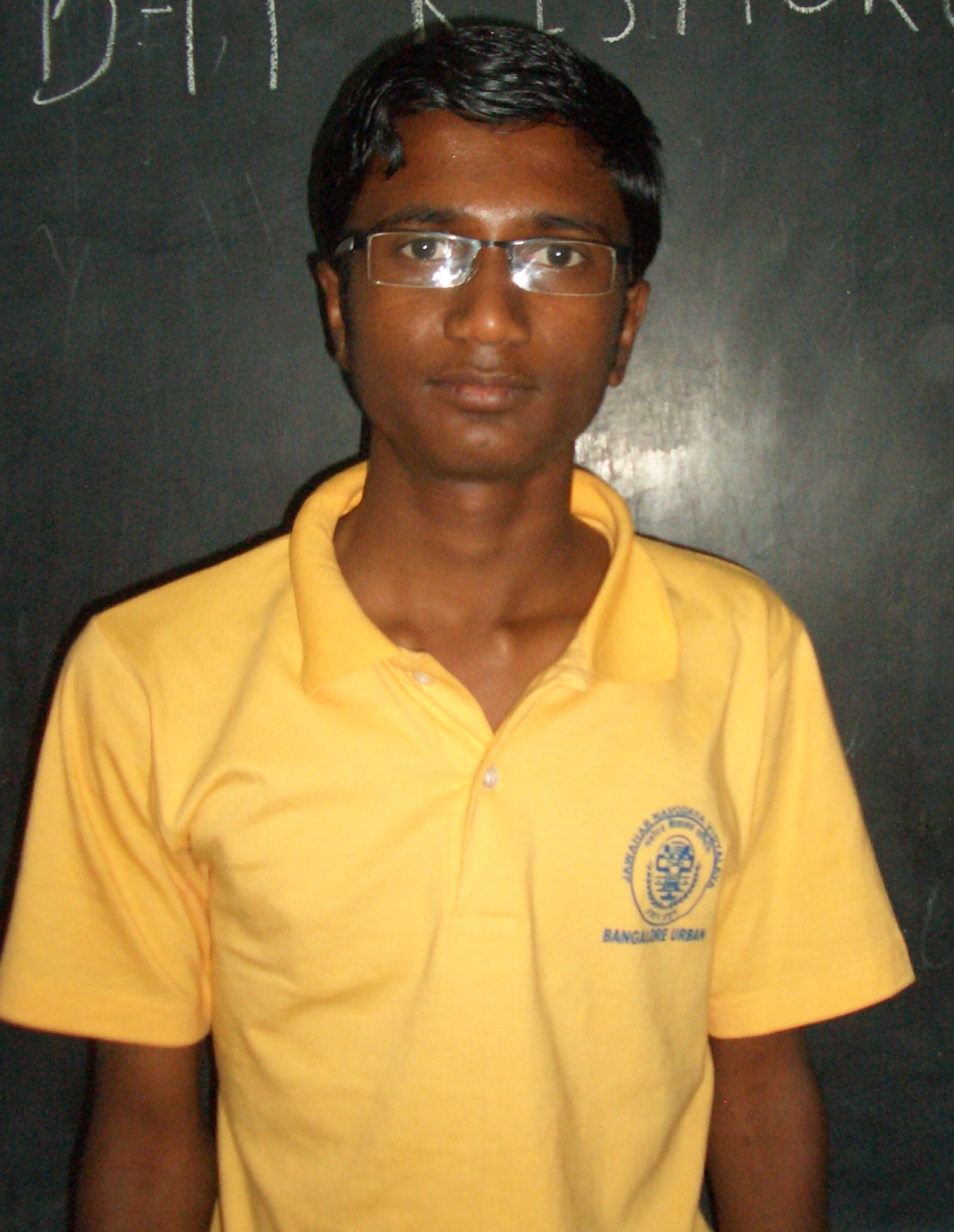 JNV Chikkaballapura I'd like to become a Dakshana scholar and hopefully attend IIT
I came from JNV Chikkaballapura Karnataka. My father?s name is Rajendra Prasad. My mother?s name is Radha. And I have one younger sister Keerthi studying in class 8. Truly speaking I didn?t know anything about Dakshana Foundation earlier. While I was in my school studying in XI class my teacher announced my name along with other four that we have been selected for IIT scholar Test. I felt very happy and I thought is my luck that brought me this chance. I had left with only two weeks to prepare for the exam. So I glanced out all 9th class CBSE textbooks, class 10th books, class 11th references and other competitive exam books available in our library. I fell that it is not enough to be one among many students those who have been selected for IIT test. I appeared for the exam in JNV Bagalur rural district. I sat for the exam and received the question paper. For an instance, I thought if I won?t make through this exam, took part only by JNV students. Then how can I pass NDA and AIEEE. And moreover, my parents are not in a condition to help me to pursue my further education.
And I decided that I must go through the test. I attempted all questions calmly and boldly. The test was over and I went back to school. I started to read IIT Tutorial books available in our library. I saw three question from physics were gone wrong. But I had my great weapon self confidence and believed that I would get the chance. I looked in the internet everyday and there was no news. One day I saw my name in the list and I informed my principal and asked to make arrangements for my departure. Then my friends were more happier than me. Because only two students were selected from Karnataka. My friends used to call me Kisro, Isro, Einstein. Then I regret about my way of working and worked smarter and better to be like real Einstein. My friends inspired me a lot and I was opened to the world outside. I gave a small party and left the school. After I reached JNV Bangalore Urban School, I met my friends from different parts of the country. Then I remembered the film Chak De India.
Sir, as Dr A.P.J. Kalam is an example for you, the flying aircrafts are my example. I wish to become a pilot in Indian Air Force. I purchased NDA exam manual and started to read it. But I reached here in this school. Even if I don?t get a chance in NDA [I will get, but in case of physical personality I may lose]. I will take Aerospace Engineering in IIT course. Really I have only one aim in my life that is to fly an aircraft and serve the country. But I need your precious guidelines and suggestions for my success in my career choice. I don?t bother about money, but I want to be a pilot. After Ajay Arora Sir, in inauguration meeting told us about Dakshana, I was very much impressed. I also sent messages for every one of my relative about www.dakshana.org and requested them to forward it to all and kindly a person like you may stand up with Dakshana for support.
After I get a job, really I want to give major part of my salary to Dakshana Foundation. I am feeling very happy and proud of myself to be one among 44 students. I will prove my worth in IIT JEE 2011 on April 10th and I will make you feel blessful and I will represent Dakshana Foundation always.