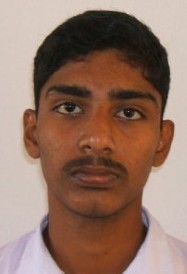 JNV Thiruvananthapuram I'd like to become a Dakshana scholar and hopefully attend IIT
I'd like to become a Dakshana scholar and hopefully attend IIT because since I was a small child I?ve heard about the prestigious IITs and thought of joining them. As I grew up, I became aware of the highly competitive IIT-JEE examination. I also became aware of the very expensive coaching classes for the IIT. I couldn?t join a world class IIT-JEE coaching institute because I cannot afford the high fees. I had given up my high hopes, but as we know ?hope is the last thing to lose.? I didn?t lose hope. I kept on searching whether I could find a substitute. At that time I came to know about the Dakshana foundation and its scholarship. I became very hopeful after hearing about this institution. I am very interested in the voluntary giveback of Dakshana scholars to fund future scholars. I thank and appreciate Dakshana for assisting impoverished students to raise themselves in their lives. Now I am very delighted to become A Dakshana scholar. I think that I will get admission to IIT by the marvelous coaching from TIME institute. I thank God and Dakshana for giving me such a grand opportunity to become a scholar. I hope that Dakshana foundation survives long enough to build a strong army of brilliant students to protect the future of India. So I hereby give my entire consent to be known as a Dakshana scholar. I consider it a proud privilege