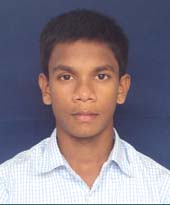 I want to get the coaching to get one of the best rank in the India. The best ranks are achieved by those who take the good preparation for the IIT-JEE. In my childhood only, I'd decided to become a software Engineer. I'd learnt nicely. Upto 6th class, I was studied in Telugu medium School. From 7th class onwards, I studies in English medium school. In the starting of 7th class, I felt some difficulty in understanding the concept. But, After that I did my best. In the 10th class, I got 10 GP in Science & Maths. Hence, I was selected for Dakshana eligible test. For this test, I think more than 3,000 students were appeared for the exam. I was selected for the Dakshana foundation which will give coaching for the IIT-JEE 2013. I was much inspired bymy neighbours to be a Software Engineer.

That?s why, I want to be a Dakshana Scholar & attend IIT- JEE.