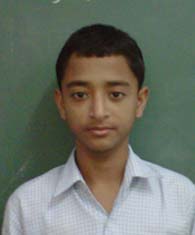 JNV Kamrup I'd like to become a Dakshana scholar and hopefully attend IIT
I'd like to become a Dakshana Scholar and hopefully attend IIT because I always dreamt of getting into IIT from the very beginning of my life. And as Dakshana scholar only I can think of getting into IIT, because my mother doesn?t have so much money to indulge me in a private coaching institutes. But after hearing about Dakshana foundation in class 9, i always thought of getting into it.
Also, our society is a society that now also lacks in development. I want to become a engineer and serve my country and make the people of my land dream big.
And then with much preparation I appeared the GDST-2011. I gave it very nicely without any tension. I hoped of getting as my Chemistry & Physics was very well, and I got Now in J.N.V, Kottayam where I & my other freinds are coached by T.I.M.E which is a good coacher of IIT-JEE.
Now I am working hard, so that I can crack IIT-JEE with a good rank and then become a engineer, so that I can serve and do something for my nation, which has given me so much.
So, I am hoping for the best till the results of IIT-JEE 2013 is declared.