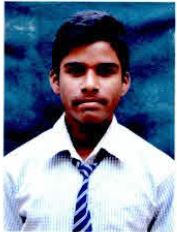 JNV Hassan, Karnataka I'd like to become a Dakshana Scholar and hopefully attend Medical college
I'd like to become Dakshana scholar and hopefully attend Medical college because I want to do something for my nation. I thought that health is the main factor which is adversely affecting the development of nation indirectly. I think that by providing better health and education to the poor people, the country also grows and the poverty can also be eradicated.
I believe that Dakshana Foundation is the best path for achieving my dreams. I also want to invent the medicine for the deadly diseases of the world and make it affordable for the poor people of our country. By doing this I hope that we can see our country in the topmost list of the developed country.
Our country was a developing country in 20th century and today, that is about 70 years of independence, and still it is a developing country and the reason is poverty. So, if this poverty is eradicated, our country would be the top country which has been developed.
I hope Dakshana would be the best way to accomplish my dreams, as it would give very good peer group and facilities to the talented but underprivileged students. I want to thank the Dakshana Foundation for providing such a wonderful opportunity for the poor people. I wish that I would also get that opportunity to be a scholar of Dakshana, which can be described as an institute which is infinitely good.