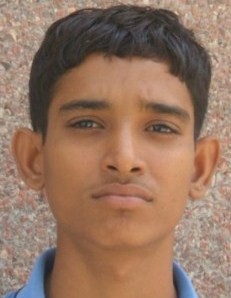 JNV Pali I'd like to become a Dakshana scholar and hopefully attend IIT
I want to thank you with my heart for you have given me a chance for IIT coaching. I want to applaud your step with my sincerest feeling. I want to say that I have decided to become an IIT?ian since class 10. But I did not have an idea on how I was going to go about and get money towards coaching. I became desperate when I found out that coaching institutes charge about Rs 70,000 a year. Through my JNV School Pali, I heard about that the Dakshana foundation was organizing an entrance scholarship test and helping those students whose income was lower than Rs 7,000. I was determined to apply. I became so happy on August 8 when I saw that you had crowned my effort and made it successful. From this I think a turn has come in my life and I believe that I can crack the IIT. I have full confidence and faith in Dakshana foundation and that with the help of this platform I can pick the moving train of IIT.
Of course what will be the final result no one knows. But the truth is that ?one good turn deserves another.? According to this pondering quote we received a good and holy message that one good work will always be at the first generation and then further on there will be many good works. Your step is fully holy and this deed will be a success and I think our mission for the IIT-JEE 2009 will be a success. I promise you that I will be able to do this deed with your cooperation and I will crack the IIT-JEE-2009. English literature says that ?action may not always be a success but nothing can be cracked without action.? I am hopeful and I think that your action and our reaction will bring our success.