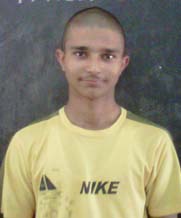 JNV Haridwar I'd like to become a Dakshana scholar and hopefully attend IIT
I'd like to become a Dakshana Scholar and hopefully attend IIT because I enjoy obstacles. From my childhood itself I have seen a strange type of fear and fever for IIT-JEE among teenagers. When I was in class IX, I decided that I have to crack IIT-JEE to taste this great exhilaration of success. But I know that It is not one?s cup of tea but still I am sure I will make it. When I reached in class X, I got a chance to visit JNV RangaReddy, Hyderabad in scout camp. There I came to know about Dakshana foundation and It seemed to me as a dream come true. I had been strongly willing to join dakshana since that time. Being a scholar of Dakshana is matter of proud but making for JEE by help of Dakshana would even be a matter of greater proud. My father is a mid class farmer and my mother is a simple housewife. When I told them about my decision to crack IITJEE, they got worried as it would be somehow expensive, but my selection in dakshana came as a light in dark room. I know what my parents have been suffering (for me). I want to give them every comfort in their old days. Same time I would like to help some orphans when I will grow up. I get annoyed when I see some orphan child begging or anything like that. To get my every aspiration came true firstly I would have to be a successfull man (an engineer and scientist). Therefore, I would like to become a Dakshana scholar with great thanks for giving me such a rare opportunity.