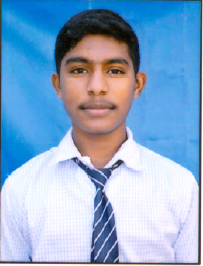 JNV Khammam - I, Telangana I'd like to become a Dakshana scholar and hopefully attend IIT
Daravath Rohith ? 19332042892
It is my dream of being a IITian. I heard that Dakshana foundation is the best one of all institutions which is producing many IITians. It is giving a hope to students to concentrate more on studies. Also many poor back ground students were benefited from this. And in my case from my childhood had a thought of going to a IIT collage and study there and also my parents wish too. It is my goal to achieve this because there are a less number of students studying in IIT?s from my village many said it?s too difficult to enter into IIT?s. There words made me to walk toward IIT?s and I am confident on me that I am going to study in IIT. Many of my seniors had been to Dakshana and they told as what it is and from there I found my best way to IIT?s and it is going to be the best foundation and also I think it is going to join more and more students and it would become the heart and soul of IIT coaching. I had saw the video of Dakshana pune Maharashtra. Which was very nice also the place where it was situated is very good. There I think no disturbance. Is created from anyone. Also the main reason Is I want to enter into a IIT college and many suggested my to join Dakshana foundation to fulfil my aim.